By Laura Smith-Spark , CNN Written by The UN envoy for Syria has blamed the government of Bashar al-Assad for blocking the political process that led to the resumption of constitutional talks this week…. 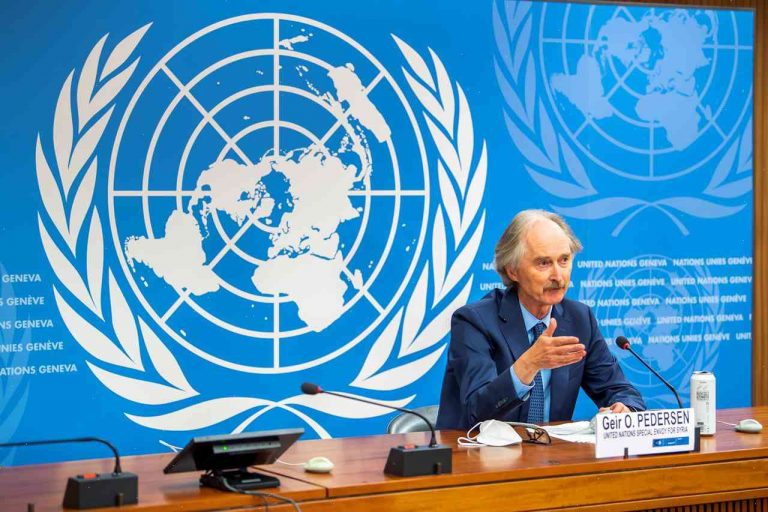 By Laura Smith-Spark , CNN Written by

The UN envoy for Syria has blamed the government of Bashar al-Assad for blocking the political process that led to the resumption of constitutional talks this week.

UN envoy Staffan de Mistura, who said last month he was leaning towards “a de-escalation zone agreement” to stop the violence, nevertheless continued on with peace talks in Geneva on Thursday.

The 12th round of the talks was greeted by a “sharp escalation” in violence, according to the Arab League and several opposition figures.

War-torn Syria has been locked in civil war since 2011, killing more than 360,000 people and causing half the population to flee their homes.

De Mistura told the daily news briefing in Geneva that his UN envoy in Syria, Staffan de Mistura, said the Syrian government was deliberately not facilitating the political process.

De Mistura said he was “extremely frustrated by the Syrian government’s refusal to participate in this political process.”

The overall mood in Geneva was “positive but it is at a glacial pace,” he said.

“(The government) wants to reach conclusions … but in that process they want to be the determinants as to what will happen next.”

De Mistura said the venue for discussions would be decided next week.

In a statement Friday, a spokesperson for de Mistura said new proposals will be presented to the government next week.

“These will centre on proposals by the opposition about the composition of a constitutional committee, which include five new members, and the additional issues that will be dealt with in the coming weeks and months,” the spokesperson said.

De Mistura said Thursday morning he was “extremely frustrated by the Syrian government’s refusal to participate in this political process” and said his negotiators had requested regular access to Syria in an effort to protect their safety.

“I am disappointed that the Government is not cooperating and that we are not reaching a consensus,” he said.

The meeting was also attended by representatives of a “broad range” of groups, according to De Mistura, including groups that rejected the UN proposal, like Tahrir al-Sham.

A statement from Tahrir al-Sham said Tuesday that the meeting failed to materialize any substantive progress in talks.

SANA, the Syrian Arab News Agency, reported that armed groups which do not accept UN-sponsored talks had not attended the talks, citing a representative of the opposition Syrian National Coalition.

De Mistura has repeatedly said that the key issue to resolving the crisis is the restoration of peace and stability in Syria.

Talks in Tehran have also begun this week as part of the comprehensive round of negotiations to resolve the conflict in Syria.

State Department spokeswoman Heather Nauert in a statement Friday said the US was “deeply concerned” by the latest wave of violence, adding that it was another example of the “deteriorating state of affairs in Syria.”

The Iran meeting represents “a dispiriting new chapter of instability and collapse of the peace process,” the statement said.

The statements come in spite of US Secretary of State Rex Tillerson, who in a press conference on Wednesday, said the Trump administration was not calling for a ceasefire.

Your Home: Inside the world’s most expensive places