BAGHDAD — Iraq’s electoral commission said on Tuesday that populist Shiite cleric Moqtada al-Sadr had won an overwhelming victory in Iraq’s parliamentary elections, securing a majority for the Iraqi National Alliance in the May… 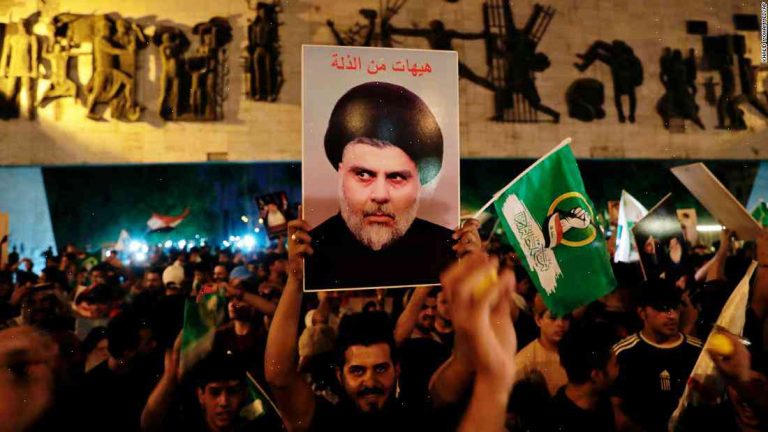 BAGHDAD — Iraq’s electoral commission said on Tuesday that populist Shiite cleric Moqtada al-Sadr had won an overwhelming victory in Iraq’s parliamentary elections, securing a majority for the Iraqi National Alliance in the May 12 runoff.

Sadr, a seasoned political figure who had come in second behind incumbent Prime Minister Haider al-Abadi in the first election in 2014, had been predicted to win more than 55 percent of the vote. On Tuesday, the electoral commission announced that Sadr’s bloc had won 102 parliamentary seats, with Abadi’s bloc coming in second, with 82 seats.

Supporters of Sadr, who got his start in politics with anti-corruption protests in 2003, cried out “Allahu Akbar” (God is Great) from trucks as they chanted “We’ve won” and “Victory is ours.”

The victory for the spiritual leader of Iraq’s largest bloc underscores the inability of Iraq’s political elite to govern effectively since the 2014 collapse of security forces in the face of an invasion by the Islamic State extremist group.

“We made a lot of sacrifices for this country and we are finishing with sacrifices now,” Sadr said, thanking his supporters for their “unconditional love.”

Iraq’s electoral commission said on its website that all 100 seats in parliament had been reported.

The new parliament will get to work, and the country’s political leaders have said they plan to immediately form a government. With his overwhelming victory, Sadr will enjoy huge influence. His parties have a history of boycotting parliament and public works contracts, and he has lent his support to candidates for president and prime minister.

By securing the support of parties from across the country, including the Kurdish parties and Iran-backed paramilitary groups, Sadr was able to dominate the election from its opening days.

But by being so prominent in the political scene, he has also drawn attention to his family’s troubles in Lebanon. His father, Ayatollah Mohammed Sadeq al-Sadr, died in an American hospital in the 1980s after an uprising against Israel’s military occupation of Lebanon.

The U.S. embassy closed the hospital for three days in 1998. It reopened in 2002 after Ali Haidar al-Sistani, the great-grandfather of Sadr and Iraq’s grand ayatollah, intervened and said all the country’s holy sites, including the hospital, were under Iranian authority.

In the wake of his father’s death, Sadr set up the Mehdi Army, which did battle against U.S. troops in 2004, and did not fully disarm until the advance by the Islamic State into Iraq in 2014.

Earlier on Tuesday, Sadr said his bloc was winning with only one campaign slogan, “Allahu Akbar,” which translates as “God is great,” “We have won,” and “Victory is ours.” It was not immediately clear whether any of Sadr’s parties will retain their names in the new government.

Abadi initially appeared poised to win a second term as prime minister, but his prospects weakened as Abadi’s coalition faced internal divisions. His rivals, including Sadr’s bloc, accused him of reneging on promises to reform Iraqi oil policy and create new jobs.

But Abadi’s rivals never got close to victory, losing support after a series of deadly bombings that swept Baghdad in April. In the wake of the bombings, Sadr said that Abadi had failed to rein in Shiite militias known as Popular Mobilization Forces, and that he should step down. The Popular Mobilization Forces withdrew from the election campaign after those comments.

Sadr told supporters in the days following the bombings that many Iraqis believed that the Popular Mobilization Forces were behind the attacks.

Though the electoral commission may soon be in Abadi’s pocket, the United States and Iran are already aggressively backing their preferred candidates. The United States backs Iranian-backed militias, such as the Popular Mobilization Forces, that confront IS groups or Sunni militants; the U.S. embassy has refused to back Sadr, who has criticized the militias.

Iran, for its part, has backed the Kurds and Abadi.

On Monday, Iran’s Supreme Leader, Ayatollah Ali Khamenei, congratulated Abadi on the results and called for unity in the country’s government. “The main issue today is national unity,” Khamenei said.